Kia Carnes MPV Launched In India, Available For Pre-booking At An Upfront Price Of Rs 25,000 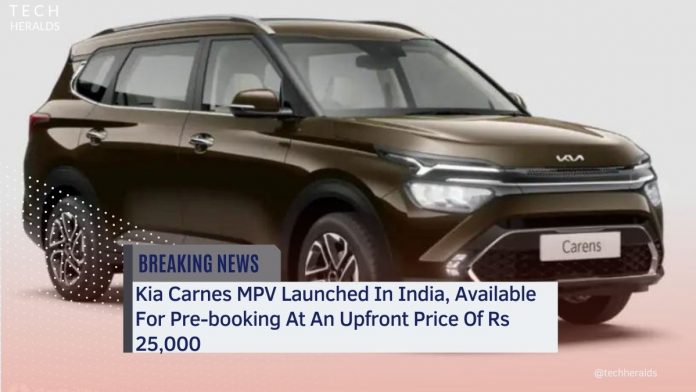 South Korean carmaker Kia has introduced the Kia Carnes model in India. The car has got the face look of Kia Seltos. It is considered the extended version of the vehicle, which has become a popular car in the Super Utility Vehicle (SUV) segment. Online booking of Kia Carnes started on 14 January with an upfront amount of Rs 25,000. Offline booking for the car is also available at Kia dealership outlets.

Kia will manufacture Carnes in India for locally selling in India and exporting to the other countries. Kia Carnes, the multi-purpose vehicle, comes in a three-row seating arrangement. Carnes has probably the most extensive wheelbase in the MPV segment. Carnes is 4,540 mm in length, 1,700mm in height and 1,800 mm in width. Under the bonnet, the car will house an engine in three variants – a 1.5-litre petrol engine, a 1.4-litre turbo petrol engine, and a 1.5-litre diesel engine. Kia has used the machine of the same capacity in the Kia Seltos SUV.

The Kia Carnes comes loaded with a plethora of luxurious features. There are 66 connected features as per the company’s claim, along with safety features, which comes as default in all the variants of Carnes. The safety features include electronic stability control, hill driving assistance and six airbags.

The car has a refined interior finish that augments the beauty of the car cabin. There is a 10.25-inch touch display mounted on the dashboard. The interior of the Kia Carnes also includes ambient colour lighting with 64 variations, 7.5-inch display resting in the instrument cluster. Additional facilities available in the car are an air purifier, sunroof, leatherette upholstery and engine remote start.

Kia Carnes is equipped with ventilated front seats, one-touch motorised tumble seats in the middle row, and a collapsible table fitted to the front back of the seat, among many other features. Although it is mainly a seven-seater, the top-of-the-line model offers the option of captain chairs for the middle row.

The price of the Kia Carnes is not made public by the company. The speculated prices of Carnes starts from Rs 14.5 Lakh in India. At the same time, the ex-showroom price of the upcoming cargo is up to Rs 19 lakh.

With the launch of Kia Carens in India, we want to bridge a void in the market for 3-row family transport vehicles by providing a car suited to the evolving demands of large Indian families. Tae-Jin Park, MD and CEO of Kia India, expressed his confidence in Carens, which has been developed to comfort commuters via pragmatic and handy amenities. “We are convinced that Carens will deliver a different travel feel to commuters,” said Park.